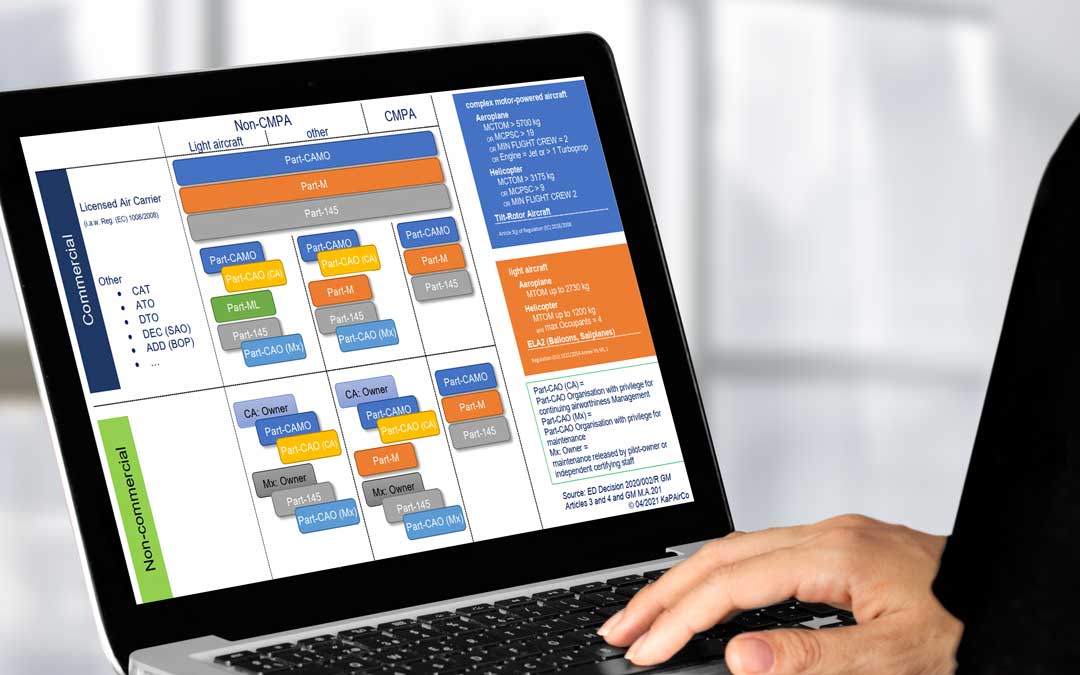 This article is meant to explain you briefly what a CAMO is and what it does. If you are already familiar with the EASA aviation rules this might be irrel­e­vant for you. If you have specific ques­tions for CAMO or other airworthiness topics, don’t hesitate to contact KaPAirCo for advice.

What is a CAMO?

CAMO is the abbre­vi­a­tion of the Contin­uing Airworthiness Manage­ment Organ­i­sa­tion. This is either a self-sustaining company or a part of a larger aviation company like an airline holding an Air Operator Certifi­cate (AOC).

The CAMO is defined and required by several European civil aviation require­ments. Other regu­la­tory frame­works outside Europe do know the CAMO as well. One example is Australia (CASR Part 42). In this article we will focus to the European CAMO.

The contin­uing airworthiness is managed by the CAMO which means that several tasks mandated by the aviation regu­la­tions are fulfilled by the CAMO.

By complying with all the task, the aircraft is consid­ered airworthy, but how is this Airworthiness defined?

To that end, every aircraft must first be certi­fied. The certi­fi­ca­tion process, also known as initial airworthiness, is carried out in the EU by the European Union Aviation Safety Agency (EASA) on behalf of the Member States. The common tech­nical require­ments and admin­is­tra­tive proce­dures for the airworthiness and envi­ron­mental certi­fi­ca­tion of aircraft are set out in Regu­la­tion (EU) No 748/2012.

Does a CAMO perform main­te­nance of aircraft?

Who is managing the contin­uing airworthiness and who is performing the main­te­nance of aircraft? 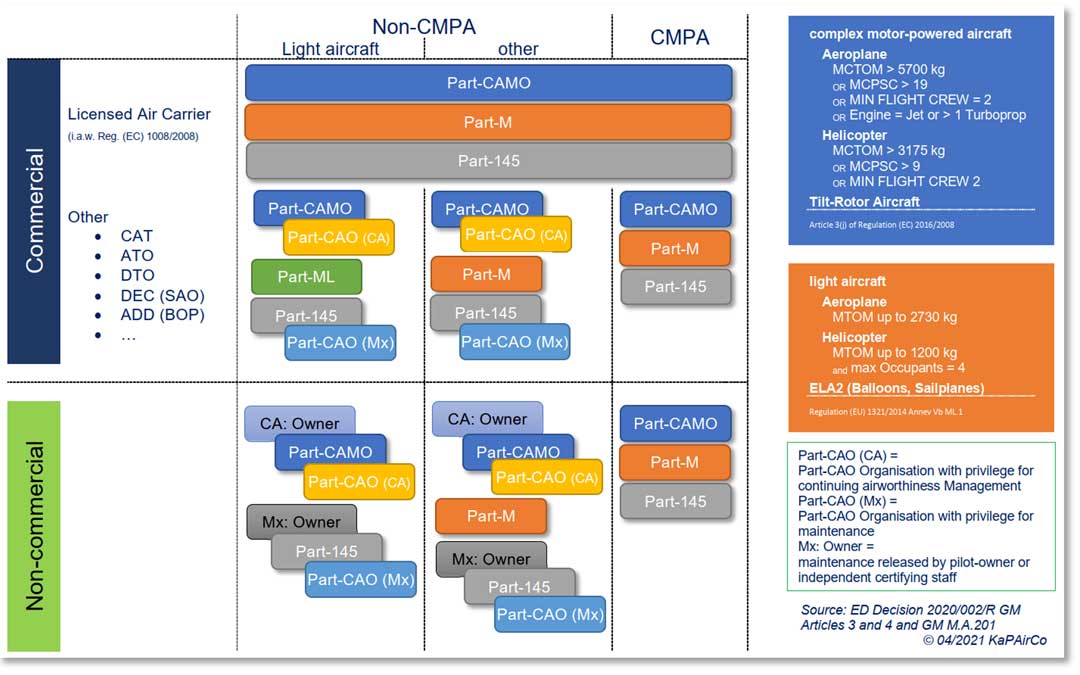 Please refer to chart above to under­stand the respon­si­bility for contin­uing airworthiness manage­ment and for aircraft maintenance.

All aircraft, even a small Cessna 172, if operated by a licensed air carrier, require a CAMO and need to follow Part-CAMO and Part‑M and main­te­nance must be performed by main­te­nance orga­ni­za­tions approved by Part-145. This is also required for all complex motor-powered-aircraft, regard­less of in commer­cial or non-commer­cial operation.

The contin­uing airworthiness and partly the main­te­nance of private (non-commer­cial) light aircraft can be managed by either the owner or by a CAMO or by a CAO (Combined Airworthiness Organisation).

The respon­si­bility depends other­wise on the type of oper­a­tion and type of aircraft as seen above.

What are the tasks of a CAMO?

The contin­uing airworthiness tasks include

Depending on aircraft type and the type and complexity of oper­a­tion several addi­tional tasks apply, like engine trend moni­toring, airplane health moni­toring, health and usage moni­toring for heli­copters, engine condi­tion moni­toring, oil moni­toring, only to mention a few.

The CAMO must develop an aircraft main­te­nance program (AMP) for every aircraft. A fleet program can be accept­able if every require­ment for every aircraft is taken into account and is iden­ti­fied as applic­able. There are several require­ments taken into consid­er­a­tion for this program. Also, the planned utiliza­tion of the aircraft including the envi­ron­mental condi­tions (for example dusty/sandy envi­ron­ment) need to be consid­ered. The AMP is subject to veri­fi­ca­tion and approval by the aviation authority.

The AMP includes inspec­tions of the aircraft and its compo­nents including overhaul require­ments of compo­nents. It includes also due times of life-limited parts (LLP) and time-controlled compo­nents. Depending on the type of managed aircraft it can be required to develop and maintain a Reli­a­bility Program as well.

The CAMO needs to ensure that all main­te­nance is performed according to that approved main­te­nance program. They need to proof this from time to time to the aviation authority and possible to leasing compa­nies or others.

The CAMO needs to estab­lish and maintain an appro­priate aircraft contin­uing airworthiness record system in compli­ance with M.A.305 and CAMO.A.220. All records need to be orga­nized according to the approved proce­dures and kept for a defined record keeping time. Avail­ability of digital data, location of systems and backups are regu­lated as well.

The CAMO must also ensure that it receives correct release certifi­cates after any main­te­nance performed for aircraft (aircraft certifi­cate of release to service) and compo­nents (EASA Form 1 or other).

The CAMO must ensure that the airworthiness certifi­cate remains valid. This is proven by another certifi­cate, the Airworthiness Review Certifi­cate (ARC, EASA Form 15). Such an ARC has a validity of 1 year and can be renewed two times. That means it has a maximum validity of 3 years. The certifi­cate can be issued by the compe­tent authority or issued or extended (renewed) by an approved CAMO. The ARC will be issued after a successful performed Airworthiness Review. This is an inspec­tion of the aircraft, the so-called physical survey together with a review of the records of the aircraft. It will be verified that no differ­ences can be found between the records and the aircraft.

Approval by Aviation Authority, Priv­i­leges and Scope of Work

When all require­ments are fulfilled and after perfor­mance of a pre-audit the orga­ni­za­tion can apply for an approval with the respon­sible civil aviation authority (compe­tent authority).

The basic approval allows the CAMO to manage the aircraft type acc. to the issued approval certifi­cate (Scope of Work). The CAMO could subcon­tract several tasks to other compa­nies, but this is subject to approval by the authority and, when granted, also shown on the certificate.

The CAMO approval remains valid as long as all require­ments remain fulfilled.

What are the regu­la­tory require­ments for a CAMO?

The following EU regu­la­tions are relevant for the Work of a CAMO:

What are the require­ments for personnel of a CAMO?

Every CAMO needs at least an Account­able Manager, a Nomi­nated Person for Contin­uing Airworthiness (NP-CA), a Compli­ance Moni­toring Manager and a Safety Manager, as shown on the following chart. 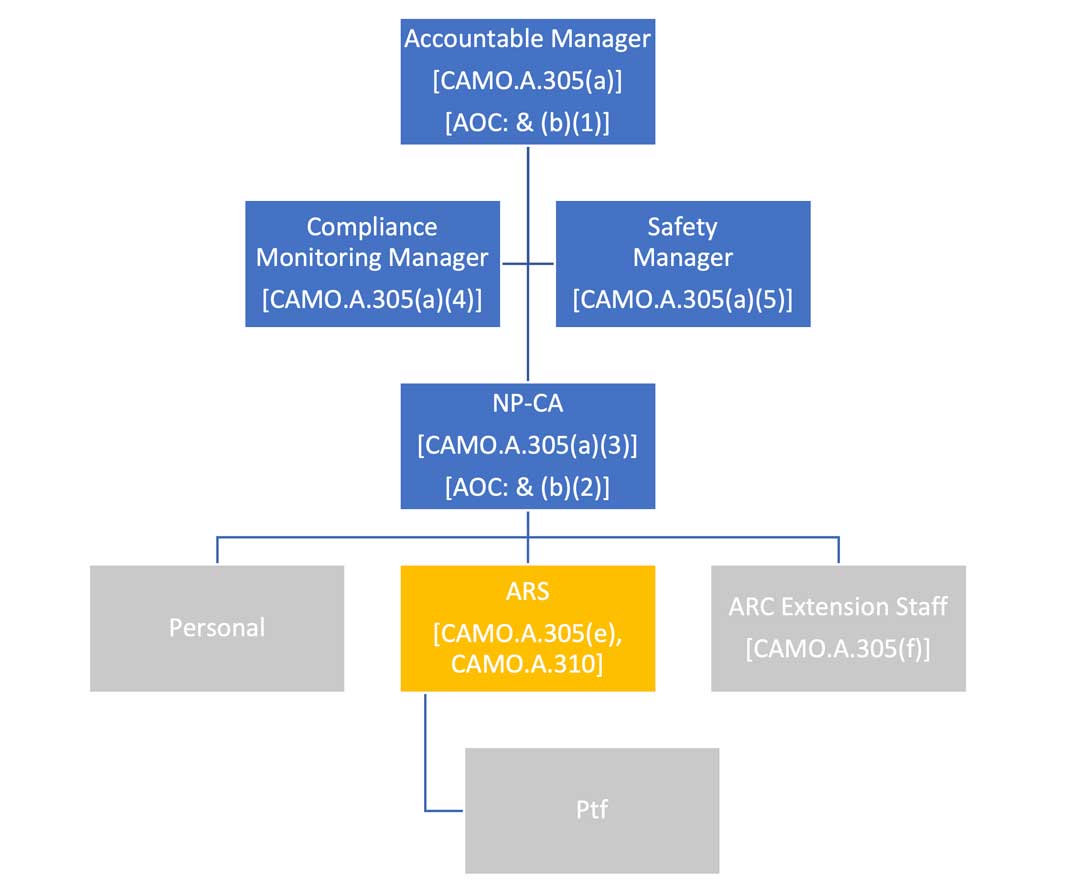 The so-called nomi­nated persons of the CAMO are subject to accep­tance by the aviation authority. In most cases an exam is written (e.g. multiple-choice test) and a personnel inter­view performed.

AMC1 CAMO.A.305© spec­i­fies several personnel require­ments like the basic tech­nical educa­tion like holding an engi­neering degree to an adequate tech­ni­cian qual­i­fi­ca­tion, prac­tical expe­ri­ence, and train­ings, knowl­edge of the relevant aircraft types and knowl­edge of the applic­able regu­la­tions. In short, you need an appro­priate qual­i­fi­ca­tion and at least 5 years’ expe­ri­ence to fulfill such a position. The EU member states can even require higher and or addi­tional requirements.

How is a CAMO organized?

An orga­ni­za­tional manual is required (by CAMO.A.300) to lay out the organ­i­sa­tion and processes of the CAMO. This manual is called CAME, which is the abbre­vi­a­tion of Contin­uing Airworthiness Manage­ment Expo­si­tion. A manage­ment system is required (ref. to CAMO.A.200) with safety manage­ment including safety reporting and compli­ance moni­toring manage­ment. The CAME is subject to an approval from the relevant civil aviation authority. Amend­ments of the CAME will be subject to either a prior-approval process or a non-prior-approval process. That means that certain changes to the organ­i­sa­tion or the processes need the approval from the compe­tent authority whereas other changes can be approved inter­nally by the company.

The organ­i­sa­tion of the CAMO is depending on the size and respon­si­bil­i­ties of the CAMO and the size, complexity and oper­a­tional needs of the respec­tive operator/airline or customer(s).

A larger CAMO could be orga­nized as follows. You can easily identify the required posi­tions and the optional personnel (in relation to aviation law) to manage the whole workload. 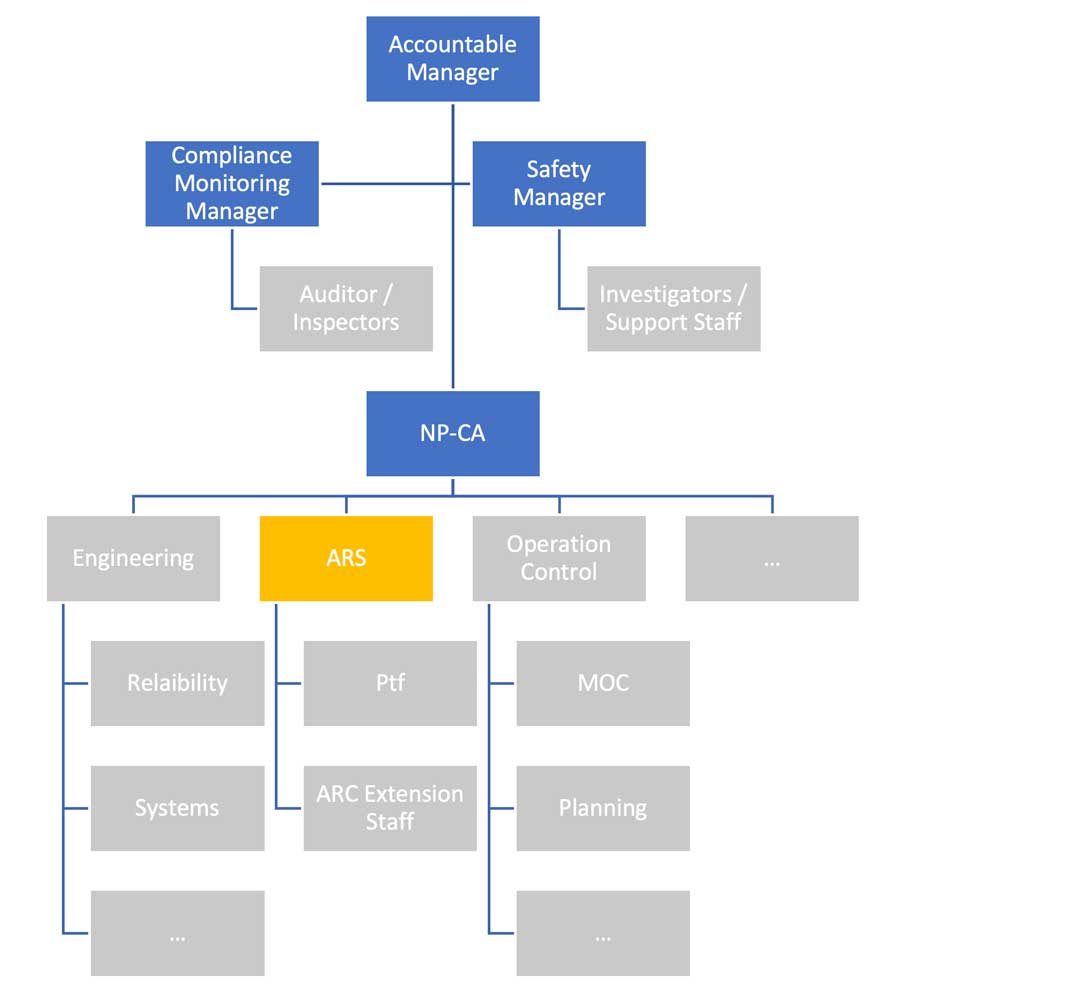 Who is checking the work of the CAMO?

All tasks and the records of the CAMO are subject to internal auditing and to over­sight by the compe­tent authority, which includes on-site auditing as well.